Sometimes people have problem skin and medicine does not bring relief. These conditions are often lumped into a category autoimmune diseases. This means the body turns against itself.

One of my colleagues, Joan, a nurse had such a problem. You can see a picture of her hands below. Her hands were so bad that she had gloves on all the time.

Her pain was easy to see when walking by her in the hall of the facility where she worked. Not being able to ignore this, a conversation revealed that the many medicines she used were ineffective. The current medicine caused additional pain on applying it.

On explaining what GSH is and how our body produces it, my story of how it was used to heal a wound on one of my fingers caught her attention. The healing left almost no scar and no infection. Likewise the story of my father-in-law and how the nurses noted that he had no inflammation around the surgical site of his back surgery.

Although seemingly unrelated disease processes, there is a connection. The interesting thing is that glutathione is in every cell of our body. Studies have demonstrated that virtually every disease process results in a decrease of intracellular glutathione.

With the empty packages of cysteine (there is some powder left behind when empty) and some cold process vitamin e-oil she began self treating. As a scientist, she realized she needed a control to measure the effectiveness of the skin care product.

Actually, she created a natural skin care product using some basic science learned in nursing school. Would this innovative skin treatment work? Look at the picture below. Before starting, both hands looked the same. At this point she no longer needed to use a glove on the right hand.

She was also using this differently than the way it is recommended. It normally is taken orally. There is a simpler way, it comes in a cream.

Any way, check out the results of this skin treatment on her skin problem. 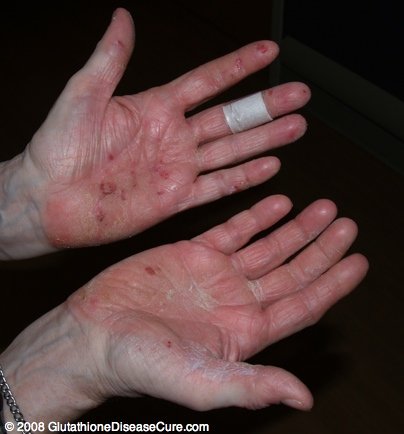