Cholesterol HDL LDL Ratio: The New You Need to Know

When considering the cholesterol HDL LDL ratio, there is a new ratio and new understanding on how to manage cholesterol. Get it wrong and it can kill you according to numerous studies.

Ask yourself the question, how can world class athletes who are a whole lot more healthy than you or I drop dead of heart attacks and strokes. The new understanding on cholesterol, Statins and how to manage high cholesterol answers the question.

The answer lies in the cholesterol HDL LDL ratio. The only thing, it is not the ratio you see below. It is a different ratio. One that can save you life if used appropriately.

Are you on Statins? Your doctor, if he does not practice evidence based medicine, may be helping boost this unique really bad cholesterol sub part. First, the old thinking, the ratios and the good, bad and ugly of statins.

Statins (HMG-CoA reductase inhibitors) are cholesterol level lowering drugs. They are given to people with or at risk of cardiovascular disease.

They work by inhibiting the enzyme (HMG-CoA reductase) that limits cholesterol production (called synthesis) and increasing synthesis of LDL receptors.

Literature indicates benefits start after one week and best results are seen in four to six weeks.

The old thinking was that the good to bad needed to be balanced in a ratio. Our bodies need cholesterol. However, not too much and not too little of each in the cholesterol HDL LDL ratio.

Information on High Levels of Cholesterol 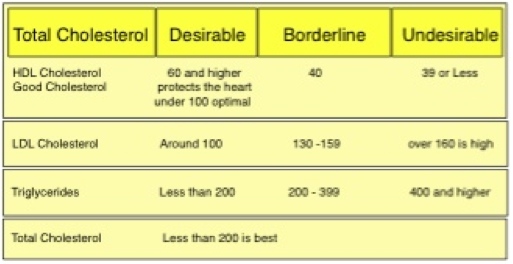 Of the several on the market, Atorvastatin was found to be more effective than four other competitors with out increasing adverse effects. They cost from $32 to $150 per month dosing.

What if there was a less expensive alternative cholesterol treatment?

Before looking at the problems, consider the alternative which has been found to be safe, effective and have numerous additional health benefits. The solution is boosting your glutathione. This can be done with diet or supplements.

What is Your Glutathione Level?

The Problem With Statins

The problem is that the very good that Statins are intended to do could be causing more damage in two ways. On is adverse effects. The other, while Statins get rid of bad cholesterol, they inadvertently increase a really really bad sub part of cholesterol.

First, a bit about Statins and the cholesterol HDL LDL ratio. Then what is new. Satins for cholesterol are wonderful but.....

But There are Adverse Effects

According to the manufacturers, Statins are considered safe with only two major side effects that occur relatively rarely according to package inserts: raised liver enzymes and skeletal muscle pain and/or damage.

Note: these side effects are per the package insert. There is more that patients are often not told.

Liver enzyme problems may also occur but at a very low incidence per studies.

More serious but rare complications include inflammation and degeneration of muscle tissue (myositis) and muscle weakness or wasting (myopathy), with the potential for rhabdomyolysis (the pathological breakdown of skeletal muscle) which can result in acute renal failure.

Coenzyme Q10 (ubiquinone- one of the endogenous antioxidants) levels are decreased in statin use and co Q10 is sometimes supplemented, increasing the cost.

Cerivastatin was withdrawn by its manufacturer in 2001 due to a 10 fold increase risk.

There are some major problems with the above information due to where and how the studies were done. The research papers probably do not tell the whole story. They were funded by the companies that make the Statins. What if there was a better way? But wait, there is more you should know.

As a nurse, I have been taught to watch out for and warn of possible drug interactions.

When combining any Statin with a Fibrate (another kind of lipid-lowering drug) there is an increased risks for rhabdomyolysis.

It does not stop there. The more other medicines you take, the greater the risk of interactions. When taking 10 different drugs, there is a 100 percent risk of all having an interaction with each other.

Eating grapefruit or grapefruit juice inhibits the metabolism of Statins, causing an increase in the levels of the Statin. So not only does it make it not work, it results in more medicine with greater risk of side effect circulating in the body.

This in turn increases the risk of adverse effects (including myopathy/rhabdomyolysis). (oops, I did not know this prior to this research and am sorry to say did not teach my patients about this.)

But this is what the drug companies say. What do they not say?

Numerous patients have confided in me that they do not like Statins. Why they do not tell their doctors, I do not know.

One Statin user, Jim Matthews did speak up. Only he spoke up to CBS news about Lipitor.

After five weeks he started having cognitive chaos and confusion. He couldn't function for hours.

In his better moments suspected Lipitor was to blame, only to find one glowing report after another on Lipitor and similar Statin drugs.

But the CBS report researcher Dr. Beatrice Golomb warned that the "studies generating the bulk of the positive press were funded by the companies that make the drugs, like Pfizer, which earns $9 billion a year from Lipitor."

Funded by the government and not drug makers, Golomb is independently looking at studies already done on statins, pinpointing severe muscle problems, which Pfizer has disclosed, and cognitive dysfunction -- not mentioned in patient leaflets.

The CBS report went on..."We have people who have lost thinking ability so rapidly that within the course of a couple of months they went from being head of major divisions of companies to not being able to balance a checkbook and being fired from their company," says Golomb, an assistant professor or medicine at the University of California in San Diego.

No question about it, Statins are good at reducing cholesterol measurements in the blood. In the studies, they are shown to reduce heart attacks.

Adverse side effects of Statins include

Finally there is a bad that does not take in to account the new guidelines on cholesterol HDL LDL ratio. It is not a cholesterol HLD LDL ratio, rather it is a ratio of the subtypes. Studies show that the old ratio is not right.

Like the question about athletes, there are other questions.

Are there any studies that show a decreased mortality in women who use them?

Looking farther, they seem to not work to prevent heart related death in those over 65.

Actually, they seem to increase death, not by heart related disease but by cancer.

Do not take what Glutathione Disease Cure says as true. Read the actual article in PubMed.

The Problem of Efficacy and Safety of Statins Here is an abstract of the abstract.

In majority of randomized controlled trials with statins results analyzing men and women over 65 separately, no lowering of rates of coronary events were found.

In some trials, increases of all cause mortality were observed in statin treated patients at the account of deaths from non-cardiovascular causes (cancer deaths in particular).

In the PROSPER trial pravastatin not only turned out useless in men and women over the age of 70, but significantly increased rate of breast cancer.

In the ALLHAT-LLT study of patients aged 65 years and older and in women pravastatin did not lower total number of nonfatal heart attacks and ischemic heart disease deaths, nor total number of deaths.

In the SPARCL and TNT study, the efficacy and safety of high dose statin (e.g. atorvastatin 80 mg/day) was assessed. There was increased risk of hemorrhagic stroke and death from noncardiovascular causes including cancer and infections.

One of meta-analyses of randomized controlled trials revealed significant increase in breast cancer risk associated with treatment with statins.

In another meta-analysis more close relationship was noted between Statins and development of cancer in elderly patients.

What if there was a better way? Some think there is.

Think about what this means. In the elderly, if you lower their cholesterol, you increase the risk of death.

This will be covered in other pages but the reason Statins work is now thought to be that they are a crude anti-inflammatory drug.